It was rainy day, but I still went to bicycling. I had planned it already 2 days. I had been getting fat and also On one of my previous ride I had seen, that there was a road reconstructed in a forest I passed, but that time I did not have time to go to check it out. I was curious if it's just for logging, or maybe I can get through of forest. So I went to ride. My feet were wet already after 20 minutes of ride. And toes were a bit cold because of that, but other wise it was pretty good, even though it was just +8C, but I had dressed accordingly.. except shoes. When I reached to gravel road the front brake started to do noise because the sand getting between  caliper and brake rotor. So annoying, why to they do the disc brakes for bicycle the way that there's so little cap between rotor and pads? I was trying braking to get rid of the sand. It worked 2 times.. I had brake pretty hard for it though.. there wasn't much braking power also. I believe it worked against noise because brakes getting hot and water vapors. It was much nicer to ride after that, until I wanted to make a stop in forest and braked again. The front brake squeaked and I felt a jerk, like something got stuck and then broke lose.. then there was rubbing of brake, worse than before.

I thought that maybe some tiny rock from gravel got stuck in cooling hole of disc rotor, but that wasn't the case, but I did not figure that out until I got back home. In forest I was just able to get wheel turning pretty freely again and I decided to continue my ride, because the rear brake was still fine. I had replaced brake pads at rear a month ago or so. I replaced rear pads because I had bought new ones and wanted to see how they perform. New ones really were better. Did not replace front pads, because I had still over 1 mm braking surface left. That's more than half. If I remember right the owner manual said that I need to replace when it's reaching to 0.8mm so I was actually keeping my eye on the brakes. I wanted to replace them, but could not since it looked like a big waste. And they did not wear at all. I was already thinking that they never wear off. Even though I have been riding so much in gravel and wet weather. So now I don't understand how they wore so much this time? Is it like the wear accelerates at the end, or maybe that road had some different gravel with more abrasive sand? Actually the max thickness of those brake pads were still little more than a millimeter. The thinnest part was just 0.6mm. I always measure the thinnest most worn edge. Anyways good that I could finally replace it, But worried that, why are bicycles made that way. So unpredictable.. The new pads are semi metallic the old ones type I don't know for sure. They should have been semimetallic. That's what TRP says about their brakes on their website, but. Who knows, they are the brakes that the bicycle was stocked with when I bought it about 3 years ago. 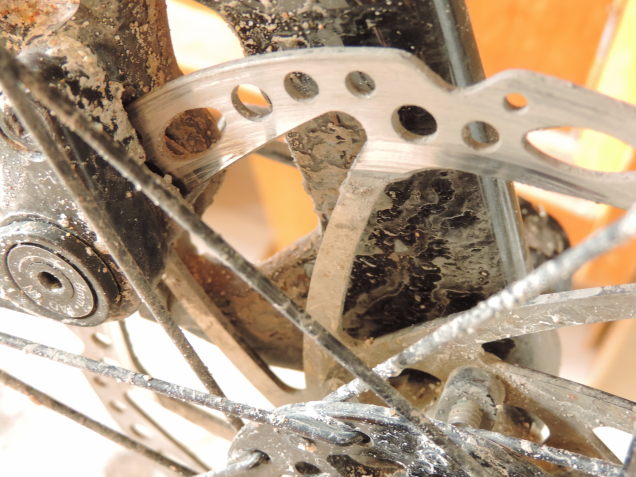 Well I guess that's all for today. If I remember anything else I want to add, I guess I add it to comments. ^_^
Thank you for reading, and if you watched the video, then thanks for that too, although it's very long video with no talking or anything.. have a nice day and well, I still haven't finished cleaning my bike, even though it's already 2 days.. I cleaned the front part and replaced brake pads, cleaned som of the rear too.. the big dirt, but the drivetrain is not encouraging me to clean it. :P But I do that tomorrow.. hopefully. Bye.
Views: 120
★
★
★
★
★
Votes: 0
E-mail me when people leave their comments –
Follow