Can't they make it easier to chose them, with some easy to understand guides? I bought a new bicycle headlight at last year. It was so difficult to chose. There wasn't such, that I could say: "This is the light I want!" So many different lights. But about 95% of them, I would call -"useless for me". They either had too low output, or just for mtb, with too bright and dazzling beam(not dipped down and wide).. spotlights.

I wanted something, that would be on same level with car lights, or very close. And would have 2 modes, dipped down wide beam that would not dazzle other road users. And full beam, or mtb mode, as I think bicycle lights, actually don't require such full beam as cars do.. Probably.

I was also worried, that some lights, might not lid up traffic signs, or anything above higher than where light is mounted.. Since they would too perfectly shooting all the light to ground only.. by description.
Other concern was, that the beam, might light too bright at close range.

On some lights, the description stated(With my own words, since don't remember theirs, or the brands, or model) that, this light beam is dipped down and has wide pattern to illuminate also road sides. All light is directed to road surface where you need it, no light gets wasted to elsewhere, this way it does not dazzle other road users.
Also that it brightly illuminating the road close at front of bike.
Like that would be something good! No, there's no way, that that would be good! A normal head light, should not brightly lid up at close range. You don't want that. You definitely don't want all those lumens shining to ground at front of you.. they would be blinding(dazzling) you.
Yes, you want it to light also at close range, but not brightly. There has to be a good balance.. Dimmer at close and more light somewhere further ahead of you. Somewhere at where you are looking most, while riding. And also you need some of light to escape to up too, to be able to see traffic signs.. or maybe tree branches that reach to road or something..

Also your light, has to be as bright as car's head lights. Otherwise, when too dim. Oncoming traffic will blind you!

Anyways, after hunting for over a year unsuccessfully. I had to buy something, because my old light just wasn't good enough. And so I bought a Chinese light. Ravemen PR1200. It wasn't too expensive, but was also not cheap.. By description, it almost has everything I wanted... But I don't know if there might have been some better choices. I had got tired from hunting, and from the doubts, and also that feeling, of how everyone is trying to deceive.
I think, that this light still might give too much light at close range.. at least on some conditions, on road(dipped down) mode.. But it's brightness can be changed and it's mtb mode is pretty good.. I like. Especially for gravel riding and country roads.. I don't ride on trails much, but I guess, it could be okay there too.

Although, I'm worried, that on road, it may dazzle oncoming traffic when on mtb mode. but I still have used it on that mode on road too, at dusk, with half brightness, or low brightness.. For me it does not look that dazzling, but.. I can't be sure. I felt like the mtb mode was much better at dusk.. Somehow the road mode was bothering my eye.. too bright on higher mode too low on lowest setting. Probably not noticeable(bright) enough to other traffic to see me.. And also to see the debris.. and/or dog poop on road. :P

Also it's attachment bracket, isn't how I like... it came with a flimsy one, so I had to buy a different one, but even with that, I can only mount it to 32mm handlebar. Although I have that dimension, I would like to mount it to lower position, underneath of handlebar, with a barxtender, which is 25mm.

I like the wired button, that connect to mini usb port of light. Same port is used to charge the light. Button I mounted close to levers, so that I can change the brightness of light, while still maintain good secure grip on handlebar and can use brake and shift levers.. The wire I wrapped under handlebar tape. Button still has some lack of functionality. It is only for changing brightness.
When I want to change the light mode, from road to mtb. I still have to let go from handlebar..  I wish I could have that other button also remote.

Actually, I forgot. There is also the turbo mode, that can be attained from that brightness button. When press and hold that button. It will go to full power of mtb mode, until I release the button. Means technically I actually can change mode when at road mode. It has been useful sometime, when riding fast and there's some place ahead, that I'm not sure about. I can turbo it to see little further and don't need to slow down unnecessarily.

Also I almost forgot to mention, that there was actually something concerning in the manual of this light also. They suggested to mount it on 10 degree angle dipped down.
Why would they suggest something like that?
My light is about 95cm from ground. If I would point it downward by 10 degree. It would shoot all those 1200 lumens against the ground just only 5.47m close at front of me.. Or well that's where the center of beam would be on mtb mode..
They want to play safe? Like, maybe someone dazzles someone with it and then they might have a court case? Or they actually seriously thought that, that would be a good idea?
I actually set it about 2 or 3 degrees angle down. And that seems pretty good for me.. that's about 20 meters ahead.. 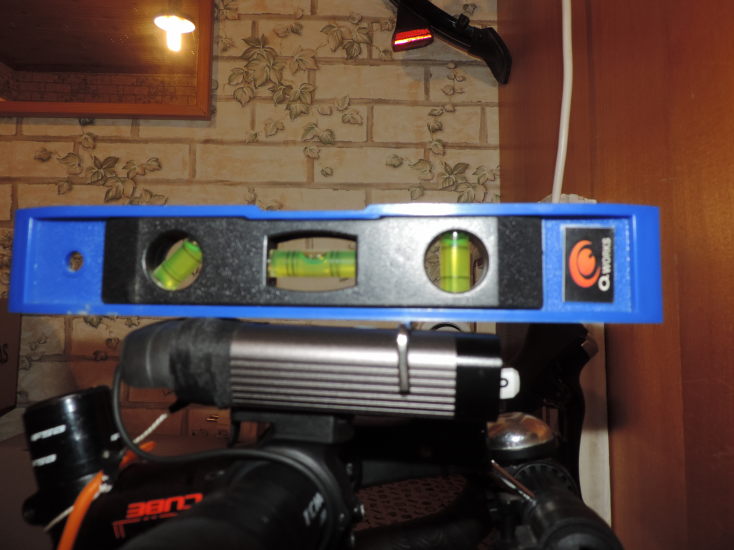 Not sure how far it really reaches, because it's really, just the center of beam.. but I think in road mode, it really is just 20m, or maybe 25m that is lid brightly.. since this light don't have very sharp transitions from bright to dark.. it might lid a bit further.

And here are some videos, of this light in action when riding in dark.
In road mode at country.. I would have liked it to reach further, but it was okay.. If I switched to mtb mode, it would have lighted further, but I thought it's annoying to switch it back to dipped down (road)mode in darkness, when there's on coming cars...


This is a long video, at the beginning it's in fog, that will get thicker. In the end of the video, it has got darker. Fog is only at beginning.. There's also moonlight.. and moon.

And one more very long video.. the sequel of the previous one.. In dark and on snowy road, that was also a bit slippery too.. But very soon, I reach to town and make some rounds there, on road little and on bicycle roads more :)


And here's my old light. It was pretty bright in full mode, but dazzling. In low setting it did not light enough..
Also it was emitting radio interference waves. Even after I had replaced it's power cable, with a shielded one. It still emitted them. Interfering the work of my wireless cadence, speed and heart rate sensors.. With it's original, non shielded power cable, it was horrible. Even could not listen radio when switched this light on, in close(about 30 cm) to radio antenna..

The beak I made for it to make it lid road at close too. Since it's white it reflected some light down at front of bike. It was very effective, exactly right amount of light in full power, that I could see in slow speed at close range. And not blinded on high speed. Good even on high speed too.

And a link to video that shows the old light in action: https://youtu.be/2nVRuSnCtSE .In that video, I could not see well when on coming cars passing me, because light was on low mode.. and did not dare to use full brightness, since was worried, that it might dazzle drivers and cause accident.. So if there was anything on road I might have crashed.