0
The heroes of this group are letters - letters that cooperate to produce words and of course meaningful ones. This humble work of letters necessitates the creation of dictionaries, and makes us dictionary-bound to understand the meaning of words.
34 Members
Once upon a time Mr P was annoyed and was blaming his loneliness and uselessness. To overcome this he called his friend Miss L to ask about her news and fix a date to meet. Next day, they met At the coffee shop and started remembring their old days and how they missed their two friends Mr A and Mrs Y,and how good friends and companions they were. Mr P and Mrs L decided to call Mr A and Mrs Y to join and form their group and start an activity: to PLAY.
Being four letters was not enough for them to vary their game, apply rules and devolop it. Voluntarily, they invite the other letters to join. The P L A Y team and their mates succeeded in creating a huge number of words and call it Vocabulary which was the material of the game.
With all rights reserved, in our turn we are going to adopt the four letters game as follows:
- Choose a word from vocabulary.
- "Play" with the chosen word in deffirent ways to derive the maximum of words from it.
- Identify which new words you find.
- Provide an explanation to these words.
- Make senteces with these new words.
- Finally, choose a word for the next player, and conclude with the expression ' Can you find more?' .i.e. the next player has to read your work and find any other words.
I wish I am clear and to the point.
With the best of luck.
Play and learn.

of 5 Next
This reply was deleted. 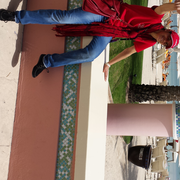 Think of Vs think about

Hi Dear members,Have you got an idea about the difference between these two expressions: I am thinking of you, and I am thinking about you.Waiting for your replyRegards

You know, I like this word very much because it functions as a verb and as an adjective, besides it can mean so many meanings.Here you are some: to save, to waste, to free, have something extra, something you do not need any more, prevent someone from experiencing something bad.Now I can think of some exemples to make things clear:*I have to spare some money to offer my friend a birthday-gift.*The exams are so near, I have no time to spare.*You can spend the night here, we have a spare room in…