ENVY ... these four letters are pretty dangerous, right? These four letters are behind
many arguments, regrets, conflicts and even murders. One of the sins. Despite this all there are still people who envy everything you can imagine and sometimes I am wondering and asking myself... "Whyyyyyyyy??!!!!"

So here I summed up some common examples we can come across in our daily life  and which are related to E N V Y... Note: EP = Envious Person or ehmmmm Psycho?

EP: "Ohh myyy, she has better figure, I bet she was just born this way but look at me, it is so unfair!" Reality: She works hard on it, spends time on sport activities, follows healthy diet and you can do the same to look even better orrr she was really born with faster metabolism and is lucky but to feel fit is about moving body, so logically you can get into better shape than sb who does nothing!

EP: He has a new model of Mercedes and I am sure money he invested in it was illegal. He must be a part of mafia, I bet!
Reality: He works hard till night, his family life isn't that awesome, however his company is prosperous despite he went through many crisis and had to deal with stressful periods of life, had even heart attack. Anyway this is what envious people don't see.. So yeah... Run own business and purchase Ferrari!

EP: "Why is she so popular? I can't ever be like her! Everybody is so crazy about her and I really have no idea what they all see in her!"
Reality: She is just herself and people can sense when one is sincere with them and feel just relaxed. If you stop being tensed and free your mind from bad thoughts, you can be like her or if her popularity is fake - sooner or later the truth will be revealed:)

So don't you think that envy is sometimes something, what makes others blind? They always find the reasons, why to envy and logically it is easier to sit on the sofa, criticize and gossip instead of taking action and change the things...

Another cool chapter is...money. Speaking of finance I have noticed some individuals are able to turn into envious insane freaks who are obsessed with how much earns that one neighbour or why is their sallary so low! People work and save money and it is all up to them, how they decide to spend it. If some prefer wearing branded clothes, others love to smoke a pack of ciggarets a day, everybody's own business. Eventually it is about our preferences and mindset because we hardly can have everything we dream of and we should be aware of it..

It is pretty disappointing that instead of being well-wishers, some of us tend to be mean envious gossipers. Anyway what's the root of it? Is it about our personality? Is envy coded in our DNA? As you know many things, which influence us happened in the childhood.. So even envy can be practised perfectly as other kids have what we desire and some can't get it. It might grow with us. Some believe that envy is also impact of evolution and the way how our brain responses to the particular actions is related to the something called natural selection. Some scientists also claim that it is in our genes.

Well, as I am not the scientist nor the psychologist, my rational thinking is telling me that it is also probably about our attitude towards life and our maturity. It seems to me that envy is just something like a defensive mechanism or let's say upset reaction to our own failure and inability. Let me add one more interesting point... Talking from own experience I have to admit that the girls/women are more envious than the boys/men. I guess the boys/men are not under such pressure to look awesome,  have better self-esteem, they are mostly freethinkers and don't care so much about meaningless things like who has better this or that... (oooppps maybe apart from the cars and the girls/women)..

So the question is.. Why not to accept ourself the way we are, believe in what we are good at, appreciate it, also appreciate others and wish them all the best, instead of comparing ourself, feeling bad and vent this mood through envious behaviour, which will never ever cause anything good.... because... evil breeds evil... 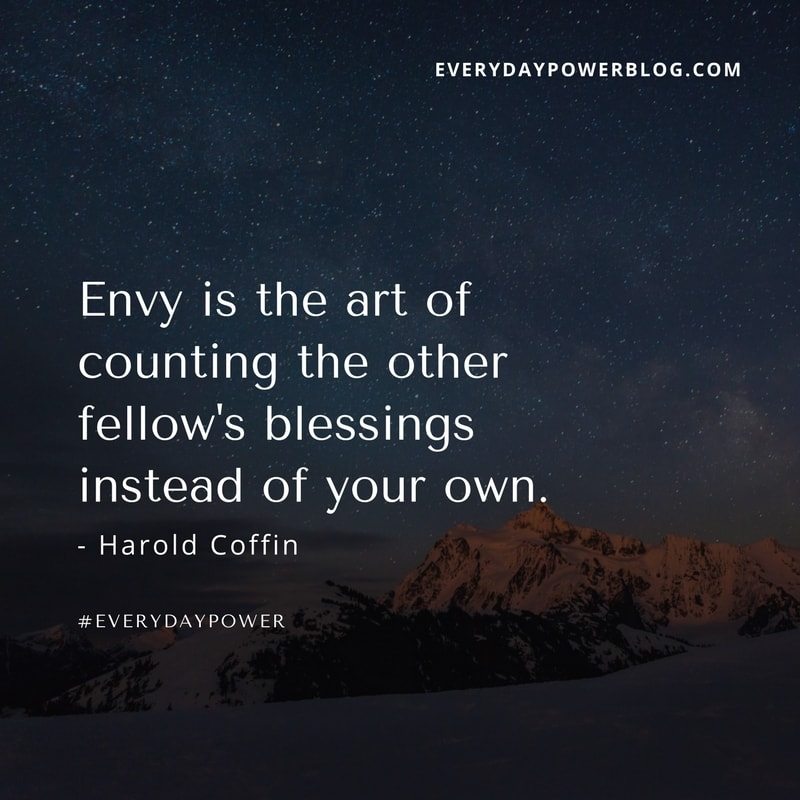 P. S. Thanks for reading me and if you are willing to share some experiences with envious people, you can describe them in your comments bellow. I am looking forward to reading you, guys :)

Picture was taken from: https://everydaypowerblog.com/quotes-about-envy/