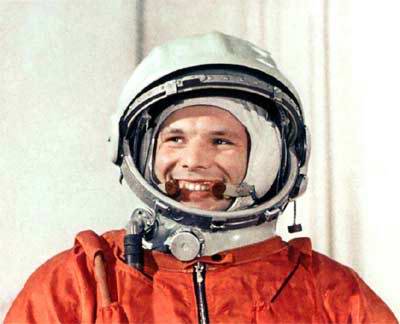 This year we’re celebrating the 80th anniversary since the first Russian Cosmonaut Yuri Gagarin was born! In my native city Saratov we have  major celebrations devoted to this event as Yuri Gagarin is connected with Saratov in many ways. He studied and then first flew in the air in this city. He also landed  nearby after his great flight. We’re really proud of all  these facts!

Who was Yuri Gagarin?

Yuri Gagarin was a 27-year-old Soviet Air Force pilot when he made his first and only trip into space. On April 12, 1961 Russia successfully launched the first man into space taking the prize for "The First Man In Space". Yuri Gagarin  orbited the Earth on the spacecraft, Vostok 1, at a speed of 27,400 km. The flight lasted 108 minutes. At the highest point, Gagarin was about 327 kilometers above the Earth.  Upon his triumphant return he instantly became a national treasure. Yuri Gagarin had a charming smile and an open friendly personality.

He was born in the village Klushino, Smolensk region, 160km west of Moscow, in 1934. His parents worked on a collective farm (his father was a carpenter) and Yuri was the third of four children. The war years (World War II) were hard for the Gagarins. The Germans shipped his teenage siblings to slave labour camps and they did not return until 1945.

At 16, Gagarin left for Moscow to apprentice as a foundryman. He was transferred a year later to study tractors at a technical school in Saratov, where he joined an AeroClub and flew, for the first time, in a canvas-clad Yak-18. At 21 he signed up at the Pilots School in Orenburg. On graduation, he was posted to Murmansk, close to the Norwegian border and north of the Arctic Circle. Later Lieutenant Gagarin was chosen for the new cosmonaut training programme.

Gagarin was one of 20 cosmonauts sent to train in the new Star City (later renamed in his honour) outside Moscow. They were subjected to batteries of medical and psychological tests and rigorous physical training, including sessions in centrifuges to prepare them for the G-forces of launch.

Eventually, just two candidates remained: Gagarin and German Titov. Both were smart enough to be the first in space. The decision to give the history-making flight to Gagarin may have been made because the Soviet premier, Nikita Khrushchev, wanted a farm boy, like himself.

Titov was distraught, but before his death in 2000, he told the authors of Starman: "Yuri turned out to be the man that everyone loved. They were right to choose Yuri."

They rose at 5.30am on 12 April, though neither Gagarin nor Titov had slept. Both dressed in spacesuits, Titov just in case. They rode to the launch pad Baikonur Cosmodrome ( Kazakhstan now).

There was no countdown, which was a purely dramatic invention of the Americans. Sergei Korolev (the aircraft engineer who sent him into space)  checked with Gagarin three times in the hour leading up to the launch and, at 9.06am, the final commands were given.

As was planned, Gagarin ejected after reentry into Earth's atmosphere (7 km above the Earth) and landed by parachute.  He landed 40 km from Saratov (the city where he made his first flight) near the village of Smelovka. His spacecraft thudded down under its own parachute two miles away. Two schoolgirls witnessed the Vostok landing and described the scene: "It was a huge ball, about two or three metres high. It fell, then it bounced and then it fell again. There was a huge hole where it hit the first time."

His landing was 280 km to the west of the planned landing site (near Baikonur).

A farmer and her daughter observed the strange scene of a figure in a bright orange suit with a large white helmet landing near them by parachute. Gagarin later recalled, "When they saw me in my space suit and the parachute dragging alongside as I walked, they started to back away in fear. I told them, don't be afraid, I am a Soviet citizen like you, who has descended from space and I must find a telephone to call Moscow!"

Colonel Yuri Gagarin died on March 27, 1968 when the MiG-15 he was piloting crashed near Moscow. At the time of his death, Yuri Gagarin was in training for a second space mission.

Yuri Gagarin will be Cosmonaut number 1 in the world for ever!

The Vostok 1 capsule on display