A food disorder sometimes referred to as an eating disorder can be defined as an abnormal eating behavior or tendency. Abnormal eating means either taking low quantities of food or too much of it, that is, insufficient or excessive food intake. In other words, this implies that excessive and insufficient food intakes can be detrimental to an individual’s physical and mental health. This paper gives a critical analysis of different stances of three journals. It is achieved by giving an evaluation of their explanations.

To begin with, it is paramount to acknowledge that people need some kind of healthy eating. This is referred to as a balanced diet. Balanced diet does not mean taking too much food, but entails taking food for its nutritional value. Nutritional value of food can only be attained by taking a balanced nutritious food prepared under proper hygienic conditions, so that its nutrients are preserved. Nobody eats primarily to fill their stomach calling that a healthy eating habit. At the same time, nobody eats only for not being starved. Otherwise, everyone should have one goal in their eating. The primary goal of eating should be aimed at staying healthy.

There are numerous diseases caused by eating disorders. Jones, C., Harris, G., Leung, N. and M. Hippocrates argue that unhealthy eating is the major cause of diseases. Today, man has developed mad liking and fascination of foods with too much spicy content. These are fast foods prepared under unhealthy conditions, mainly only taken to satisfy one’s taste buds. Less or no attention is paid to what happens to the digestive processes in the alimentary canal. This confirms their assertion that fast foods are not healthy for human beings because they have lots of drawbacks. The paper agrees that this is why the leading fast food multinationals such as McDonald are criticized today.

Today’s man is a sick man. In the United States, for instance, statistics show that half of the population can point out at least one individual with some kind of an eating disorder. Some of the most prevalent eating disorders have been sampled in medical journals all over the world. Below are just some of the most commonly discussed conditions, believed to be caused by unhealthy eating habits. They are the ones recognized by medical journals.

Anorexia nervosa (AN) - This has to do with someone being too insecure with weight increase. One refuses to keep a healthy body weight, some knowingly and others unconsciously. People may tell you how thin you have become but looking in the mirror, you are convinced you are too fat. This excessive insecurity with weight may lead to one starving or just eating too less generally, which may lead to starvation and malnutrition.

The unconscious patients are often referred to as having ‘atypical eating disorders’. It comes along with far reaching effects including heart stress which makes one vulnerable to heart attacks. Other equally serious conditions include bone loss, stopping of menstruation, and loss of clear skin. All these may lead to death. Anorexia nervosa treatment should commence early enough before it reaches the uncontrollable levels. The longer it lasts, the harder it becomes to overturn. Anorexia nervosa treatment must be comprehensive and involve all the aspects of the patient.

The treatment measures should seek to take the body weight of the patient to over 90% of what a normal body weight must be of a person of the same height. The treatment involves a psychological aspect as well. It must also include some kind of psychotherapy to deal with the psychic trauma and advise the anorexics how to live in a healthy manner.

Bulimia nervosa (BN) – This disorder shows in recurrent binge eating. Binge eating involves compulsive overeating. People want to take in huge amounts of food. They feel unable to control or stop taking in more food. Some binge eating episodes may last two hours or even more. At times, bingeing takes an on and off dimension. One eats even when they are not hungry and may eat on long after they are full. Binges always resort to certain compensatory behaviors, for example purging/self-induced vomiting, too much use of laxatives, fasting and also over exercising.

There have been attempts to find a way out of Bulimia nervosa. Treatment plans and drug therapies have been developed to try to reduce this condition among the world population. Treatment combines family therapy, psychotherapy and medication.

Genetics may predispose an individual towards eating disorders. One may acquire the eating disorder trait from their parents. Epigenetic mechanisms of getting food disorders are the environmental factors that lead to alteration of genetic expressions. It may stop during some period in someone’s life or continue throughout their entire life. Dysregulation of dopaminergic neurotransmission caused by epigenetic factors has been thought to result into eating disorders.

Eating behavior is also influenced by certain biochemical factors. It is a neuroendocrine-controlled behavior. HPA axis is a major component of the neuroendocrine system. Dysregulation of the Hypothalamus- Pituitary-Adrenal axis is attributed to eating disorders.

On the other hand, unhealthy eating can result into some hidden harmful consequences for the body, mind and soul. It aids in reducing the internal strength required for managing and enduring mental stresses. Minimal diet keeps the physiological processes up-to-date, boosts mental control on a person, other than giving rest to the digestive system. The body is composed of factory-like systems that may always find it fit to give their employees some days or hours off duty. Rest is needed in any normal system to help in creating a refreshing mood that then increases productivity and efficiency of the body organs involved.

Our digestive system comprises of the gall bladder, rectum, small and large intestines and anus. It is a system of tubes with the ability to expand and contract so as to be able to move food forward. Food taken in excess quantities creates jam in the system and makes the digestion process less efficient. The digestive juices available in the stomach may never be enough to digest too much food taken. Such a condition can result into indigestion. Stomach colic and stomach flatulence, acidity, vomiting and constipation may result.

Another scholar, Mr. Patrick concurs with the fact that longevity is another benefit of eating less. Studies have shown that octogenarians and older people are often very slim bodied. Their lives revolve around modest eating. Slim bodies are in most cases associated with eating less. They have an all-important benefit of less fat around the hearts and other vital organs. Ischemic heart diseases are also prevented. They have low cholesterol levels, a lot of energy and are light in their movement. This paper agrees with his assertions. It is true that those who adopt good eating habits are the only ones who can live longer. In other words, longevity is closely linked to food.

It is imperative to note that whatever extra amount of food we take over what our body requires can only be stored in the body in the form of fat. However, as Grave, R.D. justifies, fat is not good for human health. It is true that it is the main source of problems faced by people today. For instance, it can lead to weight gain and result in obesity. It also reduces the efficiency and optimum functioning of the digestive system because of the dumping that takes place. Other serious problems such as diabetes, high blood pressure and heart diseases may also be experienced. The paper would like to agree with him on his stance. As for excessive eating, no known benefits can be noted. It is more of a disastrous behavior than anything known to man about it. A lot of diseases and serious health conditions have been attributed to overeating. Some of these conditions include obesity and diabetes. It needs to be discouraged by all means possible. This is clear evidence that the eating disorder can have detrimental effects on the life of a human being.

In conclusion, the paper states that food disorders can be eliminated by everybody. Healthy eating habits come in handy to achieve a healthy living. People must recognize that eating is for their wellbeing and not for their hurt. People should not eat to kill themselves, but eat to achieve longevity. For human beings to reverse the diseased condition that the world finds itself in today, we need to make a concerted and deliberate effort toward sane and sound eating. This may be achieved by a massive campaign through media, seminars and other forums to move the masses towards healthy feeding habits and dietary concerns. It must also be noted that eating less should never be done or practiced in a way that may cause Anorexia nervosa. As these authors argue, individuals should eat appropriate amounts of food. These scholars have given an intensive coverage of this topic. Many people have succumbed to their food choices. It is true that people are what they eat. It is incumbent upon each person to be cautious of the choice they make as it can either strengthen or destroy them.

Carol Bennett, writer at order essay and a blogger. 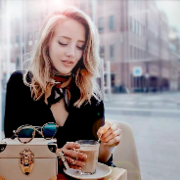 Carol Bannett is a teacher at pre-school. She has a dream to become a writer. And who knows maybe her first readers will be kids. Fashion is another big Carol's passion. What an amazing thing it is to be creative and have the ability to showcase expression through personal style.