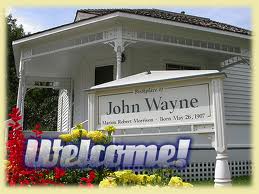 I don't know if it is true but here it is.THE POWER OF A LETTERMost of you know John Wayne as an actor. You may notknow what happened to him before he died. This isthat story! Robert Schuller's teenage daughter,Cindy, was in a motorcycle accident and had to haveher leg amputated. John Wayne is a big fan of RobertSchuller. He heard Dr. Schuller say on one of hisprograms that his daughter had been in an accident andhad to have her leg amputated. John Wayne wrote anote to her saying: Dear Cindy, Sorry to hear aboutyour accident. Hope you will be all right. Signed,John Wayne The note was delivered to her and shedecided she wanted to write John Wayne a note inreply. She wrote: Dear Mr. Wayne, I got your note.Thanks for writing to me. I like you very much. I amgoing to be all right because Jesus is going to helpme. Mr. Wayne, do you know Jesus? I sure hope youknow Jesus, Mr. Wayne, because I cannot imagine Heavenbeing complete without John Wayne being there. I hope,if you don't know Jesus, that you will give your heartto Jesus right now. See you in Heaven. And shesigned her name. She had just put that letter in anenvelope, sealed it, and written across the front ofit "John Wayne" when a visitor came into her room tosee her. He said to her: What are you doing? Shesaid: I just wrote a letter to John Wayne, but I don'tknow how to get it to him. He said: That's funny, I amgoing to have dinner with John Wayne tonight at theNewport Club down at Newport Beach. Give it to me andI will give it to him. She gave him the letter and heput it in his coat pocket. There were twelve of themthat night sitting around the table for dinner. Theywere laughing and cutting up and the guy happened toreach in his pocket and felt that letter andremembered. John Wayne was seated at the end of thetable and the guy took the letter out and said: Hey,Duke, I was in Schuller's daughter's room today andshe wrote you a letter and wanted me to give it toyou. Here it is. They passed it down to John Wayneand he opened it. They kept on laughing and cuttingup and someone happened to look down at John Wayne.He was crying. One of them said: Hey, Duke, what isthe matter? He said (and can't you hear him sayingit), " I want to read you this letter." He read theletter. Then he began to weep. He folded it, put itin his pocket, and he pointed to the man who deliveredit to him and said: "You go tell that little girl thatright now, in this restaurant, right here, John Waynegives his heart to Jesus Christ and I will see her inheaven." Three weeks later John Wayne died. You neverknow how your witness to another will effect their eternity!