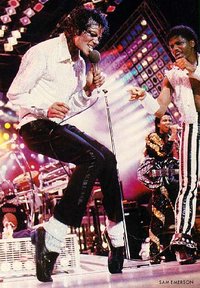 Some people loved Michael Jackson; some people loathed him. Hands up if you have danced to his music?

In memory of "The King of Pop" let's write a group obituary. An obituary is a notice of a person's death that contains details about his or her life. In this challenge, each member can write a few sentences about Michael Jackson. Try to include new information each time. (Keep in mind that an obituary is not a place to write personal opinions.)

*Don't worry about the order of the information. When all of the writing is submitted I will reorder and present it for the club to read in "obituary form".

Information to include in an obituary:You can use the Internet for research, but please do NOT copy text.Here is my contribution:Michael Jackson, the "King of Pop", died on June 25, 2009. He was 50 years old.What can you add to the obituary?"loathed"=hatedImage: www.8notes.com
Views: 645
Tags: jackson, michael, obituary, writing-challenge
★
★
★
★
★
Votes: 0
E-mail me when people leave their comments –
Follow