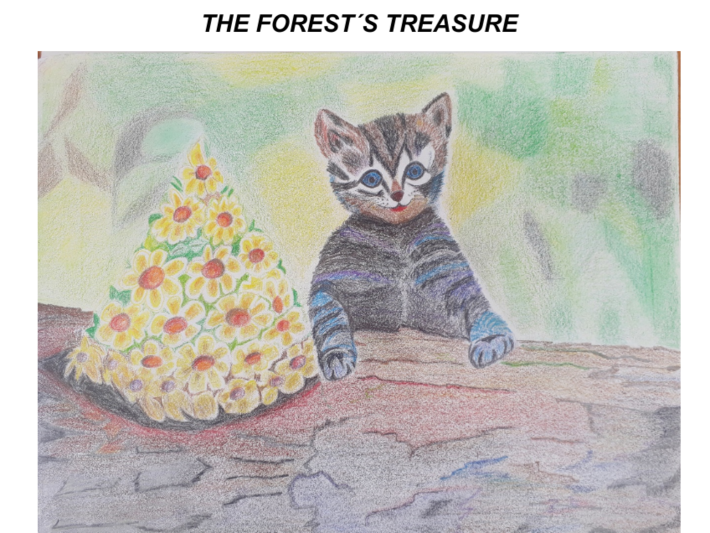 Story and picture by Janeth Duarte

THE DAY broke, brushstrokes of color showed up in a dark sky, painting it with softened reds and oranges. A tender drizzle had drenched the soil, filling the air with a warm scent. Some dew drops were still hanging from leaves, shining like small pieces of glass.

The cat woke up. He had a playful face and dark fur. He opened his rounded, bluish eyes thinking of the day ahead and waiting for the adventure he had dreamed about for so long: to discover the deepest secret hidden in the forest.

It was his first day outdoors. With determined step he headed to the woodland, keeping his head high and senses alert.

After a few hours walking, the cat came upon an imposing tree. He was extremely tall, slim, with many layers of green branches swirling around him like a furious tornado. The tiny animal felt astonished and with a shy voice asked the tree if he knew the mystery of that place.   The slender tree didn’t hear anything. He was too busy chatting to the clouds. The kitten shouted many times, but there was no answer.

He left disappointed and went deep into the bushes. There was a gigantic rock placed near a cave. Majestic and gleaming like the sun, tiny pieces of gold were embedded on its sides. The cat watched it with awe, asking the same question about the forest. The rock looked as if it were listening, but its “face” was too cold and unfriendly…that rock showed no interest in that issue.

The small creature lowered his head and left again. From far away he made out a creek greeting him cheerfully.  He ran to him jumping joyfully and told the brook what he wanted to know. The dashing currents of the stream full of foam were answering but every word flew away like the wind takes the notes of a song. That water was in a hurry and was only able to utter intermittent words.

The tired and sleepy feline lay down on the ground, giving up.   After some hours he straightened up upon hearing the notes of a sweet voice. It was a small flower resting over an old brownish crust, surrounded with yellow petals as if they were a glimmering crown. She asked him what took him to that side of the land.

They were talking for hours. With a smile on her face she tutored him about the most ferocious creatures wandering through the jungle stalking their prey, about the wild vegetation moving like traveling threads and wrapping everything in its way and about the magic nights decorated by a starry sky full of hovering candles. The cat fell asleep with the soft whispers of the forest.

With the first dawn rays the cat got up, calling to his friend. Leaping over the empty trunk he saw that she was gone, some dark petals were still floating in the air and a withered stalk lay on the ground.   With tearful eyes the cat left, but his heart was filled with a sweet and charming fragrance.  He realized that he would carry inside of him forever the treasure of that land: the warmth and beauty of a tiny blossom.