Actually I wanted to give a more exagerating and colorful title, but I decided not, because it would have too horrible. Anyways, first I like to share a picture of a tool that I made. I mean the one at top on picture. Made of a plank of wood, bicycle rear axle and 3 Screws with tapered heads for torx screwdriver.. Not the vernier caliper. 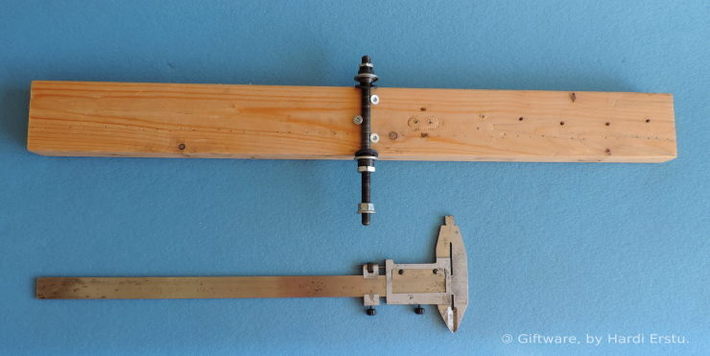 Can you quess what I use this tool for? It's bicycle rear deraileur hanger adjusting tool. What makes it special, is that all it's parts are reusable. So assuming that you already own a bicycle rear axle a plank of wood and 3 screws + screwdriver. It gomes free. Instead of vernier caliper you can use ruler or any tool, to measure distance.

There's also a good reason, why the axle is attacked with 3 screws. The one lonely screw is to keep it together and limit the play. Other 2 screws are to adjust that axle to right angle with blank. To get it right angle, just screw the tool to bicycle deraileur hanger by axle. Secure it with a nut so that it would not move, or get undone. Then measure distance from bicycle rear wheel(or optionally from frame) to one end of the blank. Then turn the blank 180 degrees around axle and measure distance from the same point of frame to this end of blank. Distance must be exacly same. If it's not, then adjust the 2 screws at right acordingly. Losening one dightening other, until the distance is same. Now the tool is ready to check your deraileur hanger adjustment. Measure distance betwen blank and wheel. On wheel measure at valve, then turn both the wheel and blank 90 degre and measure again. And then once more. 90 degre. All 3 measurements must be same. If they are not, you need to bend the deraileur hanger acordingly. If the hanger is made from aluminum. It's easy to bend. Just grab from the end of that bicycle rear axle that is screwd on tool and nudge it to desired direction. Don't try to bend it by using the blank as lever. That blank is only for measuring. Screws won't hold it dightly enough.

I have successfully used this method few times and don't feel like I need a special tool or bring the bike to shop to let them to redune it after I had adjusted it. I cot it straight enough. And I think it's creat way not just to save some money, but to help economy too, to cure it from meaningless overconsuption. The cheapest commercially available tool for this, that I found was 33.23€ which might not sound really terribly expensive, but this is still better for enivnroment. While the most expensive tool I saw was 317€ ..Unbelievable, I don't think you get noticiable better result with more expensive tool.
My gears work just after adjusting with my homemade tool.
I'm very broud of myself for making this tool, because all the parts are still reusable.. Though, I admit, that maybe you colud damage the treads on that axle, when turning the blank around it. The screws may damage it.., but I guess there are ways to protect it from that too. Maybe putting some piece of plastic there. Anyways, I believe I can little bit save the earth, the enivnroment and make economy better, because, by not buying tools and things that I actually don't need. I stop manufacturers producting things. I force them to try harder, to create things that actually are needed.. Well, the fear is that they just change bicycles again. Like they have done many times.. To change measurements, so that the parts from old models would not fit to new ones and vice versa.. Don't know good remedy for that yet.. but. Well that's just how theyand their capitalismus are. What consumer really needs is not important, the enivnroment also.. that's something that consumers should care. What is important is what they are able to sell to people and make consumers to believe that they need it.

I'm not always that successful at fighting against consuption. I so often make bad decisions, buy wrong things. Last summer I bought new computer. I had forgot that, by buying parts and building it by my self, would be cheaper. I had not build new computer 10 years. So this time I thought it's so much bother to learn all the stuff that has changed in hardware. I better buy a ready built machine. In past when I built my previous computers, I had always strugles with graphic boards and their drivers not working properly in linux. So this time I thought that I'm clever. I buy a computer with no graphic card, just only the intel gpu that is built in cpu. Later I was told how stupid I was. That I should have bought amd, that amd is linux friendly now and that they have all openshource drivers. But well whatever. What's done is done. Just that I colud have saved almost 100,,,e I think. If I researched what parts I need and built the exact same computers from parts. But it didn't come my mind that I actually could save so much. When I wanted to build wheel to my bicycle. It was oposite. If I buy all the parts, 32 spokes, spoke niples, rim and hub. It would cost much more than, buying a ready made factory wheel.. Weird isn't. I already have spoke key and truing stand, that I bult by my self. Also dishing cauge that I also built by my self, and Parktools spoketension cauge.. I rwally should have made spoketension cauge by my self too. But I thought that calibrating is difficult.. But really, it's not.. With the money I spent for tensioncauge. I could have got parts needed for calibrating stand and.. maybe it would have cost me liitle more, to build both tools.. But maybe I could have made a better tool than that tm1 by parktools company?