I am a cat. I don't remember where I was born. One day, I found myself being on the street with my brother. We seemed to have been thrown away. We walked around for a few days feeling hunger, but we couldn't find anything to eat. We mewed for a while because we were totally helpless, and then the door of a house opened. We got in the house. There was a man in the house and he was talking to his wife. They seemed to be arguing about us. She didn't seem to like us. After a while, two other people joined the argument. They seemed to be the man's son and daughter. The daughter said that they could have only one of us, but the son said that they should have both of us. The man who let us get in this house seemed to be the master of this family. The son insisted that they should have both of us because separating us would be too cruel. Thanks to the son, we got to live in this house. We were glad because we didn't need to be worried about food, rain, the cold and crows. I was not sure why the son liked us, but the reason might be my brother. As soon as he got in this house, he ran to the son and fawned upon him. Even if I do say so myself, we were cute.

For a few days after we got in the house, the son and the daughter were earnest about washing us. He took fleas from us and she washed our bodies in the shower. I don't like showers, so I always resist being washed in the shower. They named me Char and my brother Kie. We are glad to be able to eat food and shelter ourselves from rain and the cold. I am a friendly cat, so I got along with the members of the family soon, but my brother is shy, so he often hides in a closet. We like going out, but they prevented us from it because they think that outside world is dangerous for cats. They seem to be worried about us being hit by a car and fighting stray cats. And I heard that a cat that they had before didn't come back home after going outside. However, we often go out catching them off guard.

I have lived in this house for nine years, but my brother is no longer here with me. He has not come back since after going out five years ago. Their anxiety has become a reality. They were very worried about him and looked for him as much as they could. Where have you gone? What are you doing now? Though I became the only cat in this house, I am still happy to live here. Well, I am hungry, so I will ask them for a meal. 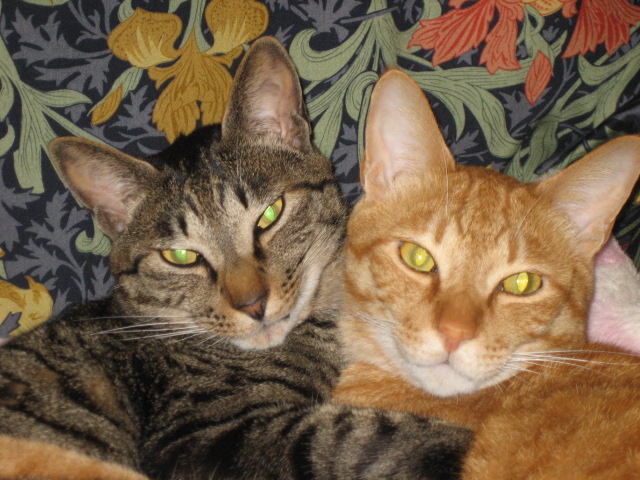 I am on the right hand side of the picture.

Tags: cats
E-mail me when people leave their comments –
Follow