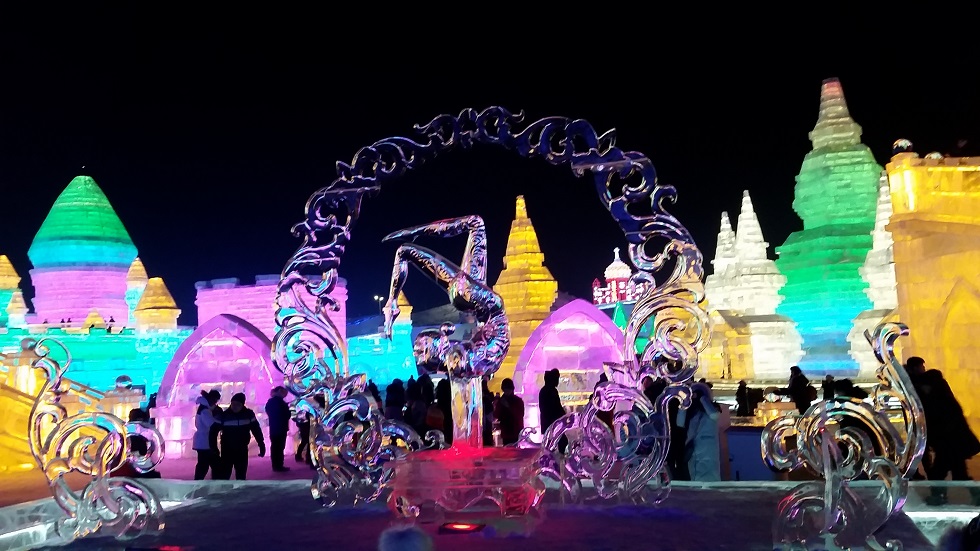 I decided to teach English in Shenzhen last May, but long before I signed my contract, I knew exactly what I would be doing during Spring Festival. As classes came to an end for the semester, I watched my friends plan trips to beautiful beaches, but I wasn’t jealous of their vacation plans for a second… I was busy reminding my fiancé to bring my parka as we would be heading north: to Harbin.

The flight from Beijing to Harbin was only about two hours. I sat giddily on the plane and read about the city. Harbin boasts the largest Ice and Snow Festival in the world and the mass scale of their seasonal construction is hard to fathom without pictures. Preparation for the festival begins months in advance with specialized builders from the area creating buildings from 2-3 foot thick blocks of ice from the Songhua River.

They use swing saws to create the giant buildings which are coveted by tourists during their annual festival. If you look up the city on Wikipedia, it doesn’t really present itself as an ideal vacation spot. Harbin is COLD, northern, and rather isolated.

Despite its logistical challenges, every winter it becomes a hotspot for tourists from China and around the world. I first saw their monstrous ice creations on Discovery Channel as a child. I thought they were beautiful as they sparkled in the night. I imagined myself a snow princess, climbing up the steps of the tallest ice buildings and watching all the people milling about below me.

I certainly didn’t realize then that the necessary thermal layers plus a parka, boots, hat, and mittens wouldn’t make me look very regal, but it would keep me (relatively) warm. The average winter temperature in Harbin is -17C (1.8F) but it regularly gets as cold as -35C (-31F) during the festival month.

My fiancé and I stayed downtown so we faced a bit of a trek to get the festival itself. Thankfully the journey was quite enjoyable so we didn’t need to focus on the reddening of our noses and the visibility of our breath.

The ice festival takes place across a river which was frozen solid. There were multiple ways to get across (a bridge with beautiful lights, a gondola ride, a horse-drawn carriage etc.). We decided to walk and were able to enjoy some spectacular views on our way. There were noise and movement everywhere; it almost reminded me of Christmas with the horse-drawn sleighs, frozen candied fruit on sticks, and children laughing and skating around. When we arrived at the festival, we joined the (surprisingly) orderly line until we could get tickets and go inside.

The festival was so large that you couldn’t see the edges, just bustling people, and magnificent constructions as far as the eye could see. It sprawled out in every direction with staircases leading to ice castles with pointed spires. Each building and statue helped light up the night due to the LED lights embedded in the blocks.

You can stay within the festival grounds indefinitely because there are restaurants (western and Chinese), places to warm up, snack stands, endless entertainment and even an ice hotel to be found within the attractions. Although the ice buildings were my favorite, I also really enjoyed the giant snow sculptures and spent hours checking out the intricate ice carvings. Teams from all over the world came to compete for titles in these fields and the level of talent was incredible.

Although the weather was bitterly cold, I would say that going to see the ice festival was an excellent location for some of my spring festival. You won’t regret the journey and it’s an excellent way to see some of the unique cultures in Northern China while pushing yourself out of your comfort zone, just make sure to bring a hat!