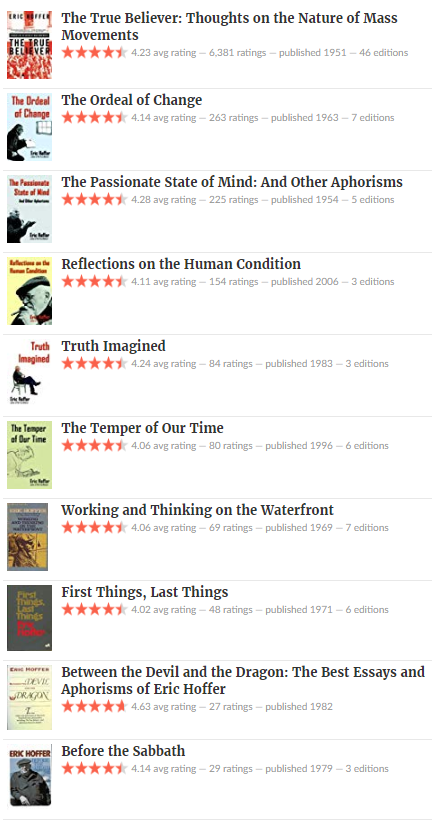 Do you love reading non-fiction books? As a matter of the fact that, most of avid readers I know are into the fiction books, because, it seems to them that reading such books help them discover new lands, new cultures and new people better than non-fiction books. Another point is that we as human being are being deeply depressed and overwhelmed by the troubles of the real life.From this point of view, reading the genres I stated above is salvation for people.

Anyway, to speak in a direct or frank manner, I have recently found out the American philosopher Eric Hoffer, who died May 21, 1983.The Author has a very interesting and intriguing life story. He lost the eyesight of his eyes when he was seven years old with an unknown reasond and his eyesight returned abruptly when he turned into fifteen years old. With the fear of losing out the eyesight again, the author dedicated himself to the reading. In other words, he began to read voraciously. For the rest of his life, he found jobs as a migrant farm worker and a manual labourer. Throughout his life, he also wrote books attached above and was invited by some university as a speaker. Even though he never studied in a school and got educated officially, a position as a consultant was proposed by some universities.

I first read "The Ordeal of Change" written by Hoffer and his remarks impressed me deeply. The Ordeal of Change  is a collection of 16 essays . All deal with political, social and philosophical ideas. The topics range from the origin and stimulus of political change, the working class and management, fanaticism, human nature and the ironies of individual freedom. Some quotes taken from the book via Goodreads are as follow; For your information, quotes were taken, because I read it in Turkish

The book is pretty good and I am sure that you will love it.

Another book giving popularity to the Hoffer is “The True Believer: Thoughts on the Nature of Mass Movements”. It is another book has spectacular and considerable remarks. The book seeks to explain the causes of mass movements and how political upheavals emerge predictably from psychological and sociological predispositions (inclinations). Some of remarkable quotes taken are stated as follow;

Furthermore, I would like to say more but these books are the ones I have recently read but they are worth of reading.